Different Thread Taps and Our
Capabilities With Each

Home Different Thread Taps and Our Capabilities With Each

Different Thread Taps and Our Capabilities With Each

Though engineers and machinists utilize thread taps for a wide range of applications, their purpose is fairly standard. Thread taps create the female portion of a pair of metal fasteners, which prepares a material to be used with a male component like bolts or screws. This concept is simple, but choosing a thread tap can be complex.

There are several different types of thread taps to accommodate your CNC machining needs. The right tap choice can help prevent frustrating tap breakage that may set you back on a component you’ve already poured hours into. Understanding each tap’s capabilities can help you narrow down what may work best in each situation. Let’s take a look at common thread taps you’ll want to consider.

A thread tap’s construction can provide advantages depending on your project. Different taps may be appropriate depending on some of the following project specifications:

With these considerations in mind, let’s examine some common tap types, as well as their uses and benefits. 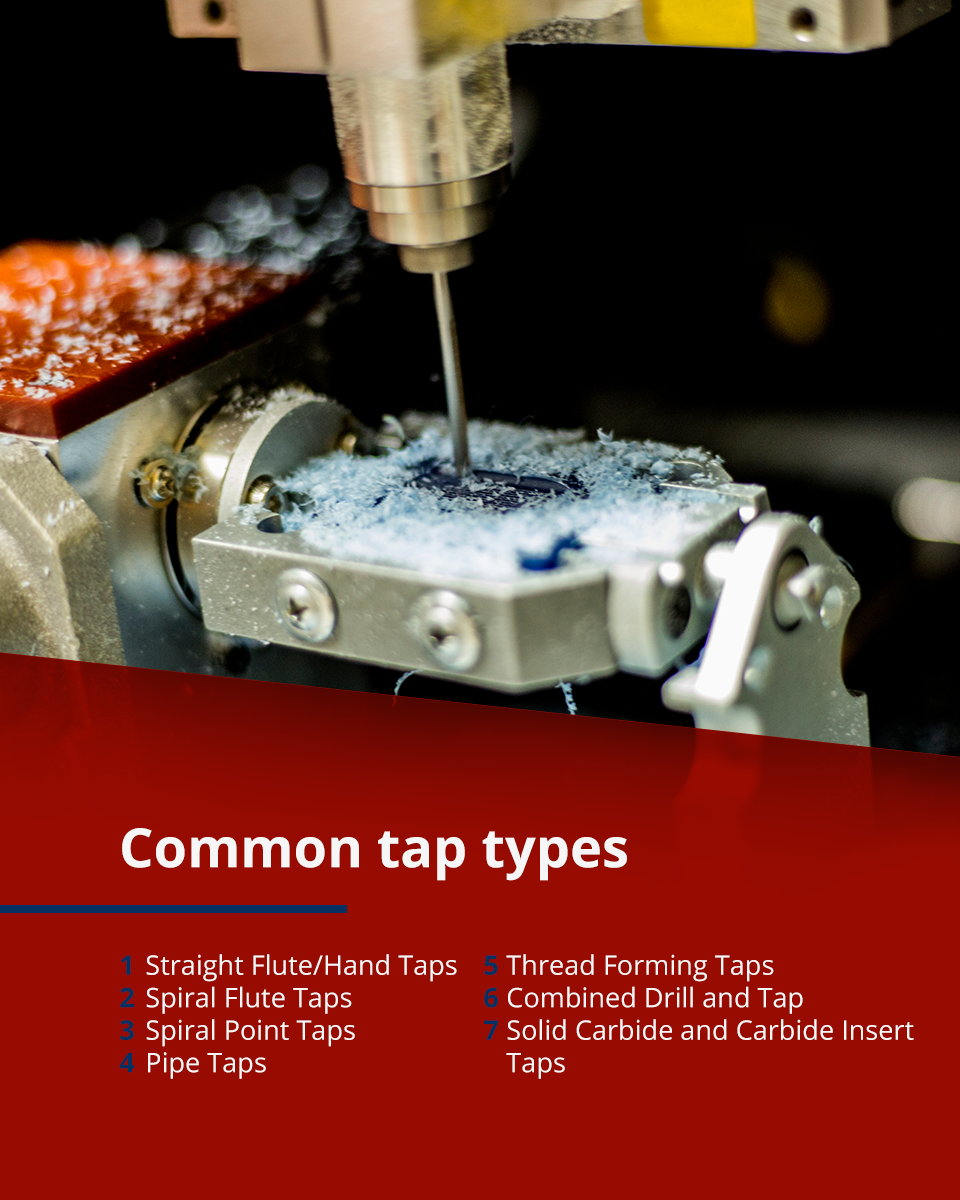 Some of the strengths of a straight flute or hand tap include:

Spiral flute taps differ from straight flute taps due to their flute construction. As the name suggests, a spiral flute tap utilizes channels that spiral around the tap body in a helical form. This structure helps to guide chips upwards and away from the tap site, which is especially helpful when tapping a blind hole.

If you use a thread tap that pushes chips into the bottom of a blind hole, you could risk breaking or damaging the tap when you reach the bottom. Spiral flute taps mitigate this issue by evacuating the chips efficiently. You may want to differentiate your spiral flute tap further by choosing a spiral degree that aligns with the material you’re tapping:

In general, some of the strengths of a spiral flute tap include:

A spiral point tap utilizes a small but important variation on the straight flute tap. Spiral point taps have an angled point that helps direct chips out in front of the tool during tapping. Given this construction, spiral point tap capabilities encompass both through holes and blind holes with enough room to accommodate chips.

Many of the spiral point tap’s strengths stem from its shallow flute design, including:

A pipe tap has a more narrow application centered around creating pipe threads. This tool is used to cut the threads in a portion of a pipe fitting or part that will be paired with the portion of an adjoining pipe. Because of this use, pipe taps tend to have several straight flutes and require more force to use.

You may use a type of pipe tap that differs from standard construction based on your project:

A pipe tap’s key strength is that, when used properly, it can create pressure-tight pipe joints.

Thread forming taps stand out from other tap types because they produce threads differently. Most taps utilize cutting edges to shave away material and create a thread. While this is effective, it makes inconvenient chips that can impede the tapping process. Instead of cutting, a thread forming tap displaces material during tapping.

The thread forming method offers a variety of advantages, including:

Because of their unique functionality, thread forming taps are best suited for somewhat malleable materials, such as:

An important consideration for thread forming taps is lubrication. The thread forming method generates increased friction, which can hinder a successful thread. For this reason, most thread forming taps include grooves or channels that help transport lubricant to the front of the tap. A dedicated tapping or extrusion fluid may support the best results when using this type of tool.

A combined drill and tap is recommended for through holes only and can handle depths of up to twice the tap’s diameter. This tool may have a variety of applications within the assembly, construction, maintenance and repair industries.

Some of the strengths of a combined drill and tap include:

Most thread taps are made from steel, but some use carbide because of the advantages it provides. As a material, carbide is extra strong and extra efficient. This makes it ideal when tapping more abrasive substances such as:

Carbide taps may come in one of two configurations:

Solid carbide and carbide insert taps are manufactured in many of the tap configurations we’ve covered. If you need extra strength and durability for your project, you can choose one of the following:

A thread tap can be further differentiated by the type of chamfer it has. The term chamfer refers to the bottom-most section of a tap. Chamfer designs serve two main purposes: to decrease the amount of force needed to use the tap and to allow the cutting teeth to make continually deeper cuts.

Manufacturers use varying chamfer angles and lengths depending on a thread tap’s purpose. When choosing a chamfer type, your primary consideration should be the type of hole you’re tapping and its depth. There are three main chamfer types you may encounter in CNC machining.

A tapered tap has the longest chamfer length — usually about seven to 10 threads long. In general, the longer a tap’s chamfer, the easier it will be to begin tapping a hole. A tapered chamfer has a slight inward angle, which makes it easier to align the tap within your hole.

Because tapered taps don’t have fully formed threads in the chamfer, they are not ideal to use when tapping the bottom of a blind hole. Instead, tapered taps work well for through holes or when cutting threads for the first time. You can typically pair a tapered tap with another chamfer style to get the results you need.

Plug taps have medium-sized chamfers between three and five threads long with a medium inward angle. A plug tap’s shallow construction requires more force to start a new thread, which makes it more difficult to use than a taper tap.

This chamfer style works well when you’re repairing a thread that has already been tapped. It can also help tap deeper into a hole once you’ve started the hole with a taper tap. If you’re threading a through hole, a plug tap can be a more effective choice than a taper tap due to its construction.

A bottoming tap has the smallest chamfer with just one or two threads. This chamfer type has a sharp inward angle, which makes it ideal for cutting threads to the bottom of a blind hole. Because a bottoming chamfer is so short, it’s extremely difficult to use when beginning a new thread. Bottoming taps are ideal to use after you’ve tapped a hole with a taper or plug tap.

No matter what kind of CNC machining projects you encounter, the right tools can improve your precision and outcomes. If you’re looking for ways to enhance performance, upgrading your thread taps could be a helpful step. At American Micro Industries, we understand some projects require more than mass-produced tools or parts. We’re here to provide high-quality, custom solutions that fit your needs perfectly.

When you work with us, you’ll benefit from our ability to streamline the custom manufacturing process under one roof. We’ll cover everything from research to material identification to prototyping and more. Our immense attention to detail drives us to do everything possible to ensure you’re completely satisfied with your custom-made product.

If you need a prototype machined or want to learn more about improving your CNC machining projects, contact us or request a quote online today.

CNC vs 3D Printing: What is the Difference?

Ready to get started?

Request information using our online form, or call our office directly at 866-774-9353 between the hours of 9am – 5pm EST, Monday to Friday.

Back to the top