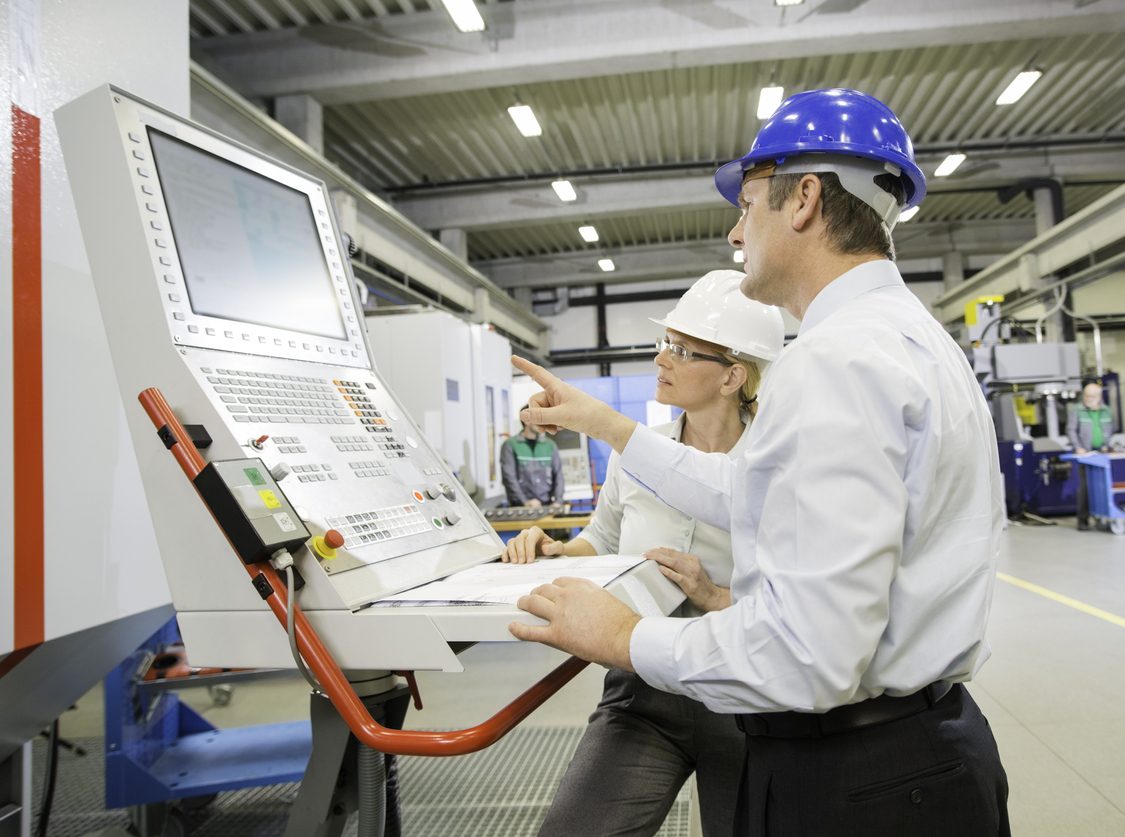 The Differences Between G Code
and M Code

Home The Differences Between G Code and M Code

The Differences Between G Code and M Code

Computer Numerical Control (CNC) programming is core to manufacturing today. Modern CNC machines operate on programs, which is why operators must know the types of code at their disposal and how to use them.

For CNC machining, programmers use G and M codes, depending on what they want the machine to do.

While the most common programming language used by CNC software is G code, M code also has specific applications. When it comes to G code versus M code, one isn’t necessarily better than the other. Instead, both types are needed to have the system perform the desired operations.

The Role of Machine Programming in CNC Manufacturing

The C in CNC programming refers to the computer operating the system.

As with any computer, it operates based on a specific language the system understands to complete certain tasks. This operational language requirement is where instructions come into CNC programming. Operators may choose to input the programs manually or use CAM software.

Regardless of the method used for inputting the information, the codes need to be perfect.

Before computers, maintaining the correct programs for multiple machinings proved difficult due to the paper format of the NC program.

In the early days of machining, the devices were numerical controlled, NC. These required cards or tape with the codes created by punching holes into a specific order. Before computers became common, machine shops regularly used punch tape to control their devices. However, the physical medium would sustain severe damage in the active shops.

Grease stains, tears and loss all occurred regularly to these punched papers. Damaged papers would cause the NC machines to read the wrong codes, resulting in serious problems.

When computers came into use for operating NC machines, the operator would input the codes manually into the computer instead of feeding the punched tape into the system.

With CNC, computer numerical controlled, programming, these machines could produce much more intricate parts due to the use of more sophisticated machinery with them.

This advancement, however, posed a problem for the machinists. With increasingly complex machines capable of working on up to five axes, manually inputting the program required too much time.

Whether put into the system manually or generated by software, programs for CNC machining include G codes and M codes. Both have distinct functions, and neither can work independently of the other.

Understanding their differences is the foundation for CNC programming.

What Are G and M Codes in CNC Programming?

What is G Code?

A G code in CNC programming controls the movements of a machine, dictating how and where a machine should move to fabricate a part.

What is M Code?

These two codes work together to manufacture parts and components, making them essential in the manufacturing and industrial sectors.

G stands for geometry, and it’s the alphanumeric format the system uses to tell the parts what to do. It indicates where to start, how to move and when to stop. For machinists, the problem with using G codes is different machines use variations on a standard set of alphanumeric numbers. So, the system that tells one device an action may indicate something different on another piece of equipment.

Differences in G code among machines lie in the number of zeros between the letter and number or the presence of spaces between commands.

For instance, one device may use the generic G1 while another may use G01. Some machines require decimal points between pieces of information while others allow the operator to omit these. Because these differences in program dialect are so critical in executing the right program, operators must always know about the language of the machine they are using.

As noted previously, G codes give the machine directions on how and where to move.

Different letters dictate how the machine moves and numbers set the parameters. While the system is called G code, G is not the only letter used. Other letters have different functions in the program, which tend to be the same, regardless of a machine’s dialect.

For example, the functions of the following letters in G code include:

Other alphanumeric designations depend on the machine’s capabilities.

For four or five-axis devices, the G code may include extra coordinate directions.

Behind every G code are directions telling a machine how to create variations on its essential functions. Generally, CNC machines have three operations, and the systems show how to adapt those tasks to create a finished product.

These three operations include the following:

From these three movements, the program can tell the machine when to stop, change the rate, create circular cuts and other directions. Through complex programs, these simple directions to the device can create intricate products.

One part of choosing values for a program requires knowing about the machine’s responses to the program.

Generally, program directions tell the machining equipment to begin doing something. The device will continue doing that until it receives a directive to stop. Machinists have to know when to input computer instructions to halt as well as to start.

Machinists may not need to put in every line of information required, though.

Some shortcuts also exist to help, like canned cycles.

In addition to individual actions, operators have the option of using canned cycles. These cycles have a single alphanumeric combination that dictates a series of steps. For instance, one cycle code can replace four lines of the program to indicate drilling or boring. These canned cycles help programmers when they need to write out the actions a machine must take.

Understanding the functions of G code makes reading operation directions easier when you see examples of them. Even if you’re not fluent in CNC machine programming, you can still recognize the importance of the alphanumeric system and the complexity of the program required to create a machined product.

While the codes used do depend on the machine, some basic letter and number combinations create generic directions. Each group of commands should only have a single G code to keep the device from getting confused. Should the operator require another G code, he will need another block of data, like in the following example:

Though machinists once had to memorize these commands during their schooling, today many don’t because the commands they use depend on the type of machine. Additionally, machinists typically input G directions so often that they quickly memorize them. Should they need a reminder, though, most CNC devices have an accompanying programming book that indicates the exact dialect the machinery requires.

While G codes give the machine instructions on where to move, M values direct the device to do miscellaneous tasks.

M code is the machine control language that controls the overall program, often called G code. While G commands describe positions, M code directs the machine’s actions. While M represents miscellaneous codes, some refer to it as machine code because it controls particular operations of the equipment.

Both G and M codes have specialized uses in programming a CNC machine.

Without M codes, you may direct tools to a spot and tell them to move in a line or arc, but you won’t have any success giving more direct commands, like to stop programs, change tools, flood the system with coolant or other actions beyond the three main movements G codes control. That’s why you can think of M codes as directing non-cutting operations.

M codes give the machine instruction on when to turn on or off operations not involved with cutting. For specific processes, for example, the machine may need to flood the system with coolant and shut it off after the temperature drops. These are two separate actions in M code.

As with G codes, the dialect used for M codes varies by machine. When setting up programs, M codes should have one per block of information. These commands give on and off functions to the machine, so having multiple commands in a single group or block could cause program problems.

Using M commands allows the machinist to tell the device to change tools, turn on the spindle, send coolant to the system or open the doors. Dozens of M operations exist, and operators learn how to program to execute desired actions fast.

As with G codes, M codes depend on the machine.

Some machines require a zero between the M and the number while others omit this requirement. Again, knowing the specific requirements detailed in the machine’s coding instructions will help the operator understand which alphanumeric programs to use.

M commands have generic values that include the following:

These examples are only some of the M values you may see on a program to run a CNC machine.

M commands appear as portions of information groups to dictate how the device should work aside from starting and stopping cutting. While M values are part of the main program, it is not the same as G commands.

The Main Difference Between G Code and M Code

G and M codes have particular, yet different uses for controlling CNC machines.

Some refer to the CNC program as G code, though the numbers accompanying G direct only the motion and function of the system. The M value is a part of the program that tells the machine how to do operations outside movements.

When looking at how these two types of commands work with a machine, think of G as for cutting and M as for miscellaneous operations.

While both control the equipment, they regulate different movements.

G commands tell the tool where and how to cut. M operations direct the machine to change tools, move the spindle or do other non-cutting tasks inside the equipment. If you want to make the process easier, you may consider CAD or CAM software, but this is not always a perfect solution.

Even if you have a CAD or CAM software program to change the directions you give to an alphanumeric program, you should still be familiar with CNC programming to make changes or amend the software based on the machine’s required input. The software will only do as much as the operator tells it to, and if you don’t understand the program it generates, you could have the machine execute an incorrect function, resulting in wasted time and material.

For some companies, having a professional source for CNC machining, like American Micro Industries Inc., alleviates the problem of creating programs on CNC machines.

Let Us Handle the Coding for Your CNC Machining Needs

You don’t need to know CNC programming to get your machined project done quickly.

At American Micro Industries Inc., we have all the equipment, materials and experts available to get your machining project done fast. Don’t worry about the size of your job. Our experts can program tasks for small prototype orders or large bulk orders. Plus, our facility can handle even high-volume machining orders.

If you want to learn more about how we complete your machining projects, contact us online for a quote.

5 Things to Consider When Choosing Your Manufacturing Partner

Advantages and Limitations of CNC Machining

Ready to get started?

Request information using our online form, or call our office directly at 866-774-9353 between the hours of 9am – 5pm EST, Monday to Friday.

Back to the top